Building the 811 Ally 16.5′ canoe for the first time with our Gambian team – Kartong, The Gambia, West Africa

And so it begins – H, Ebu & Abdou get ready to unpack and rebuild. Image © Jason Florio

We got the whole River Gambia Expedition team together the other day, here in at Sandele Eco Retreat, near the village of Kartong – which is right on the beach and the Atlantic Ocean. – where we are staying as guests of old friends, Geri and Maurice. We wanted to show our Gambian team mates, Abdou and Ebu, how to build one of the 811 Ally canoes. 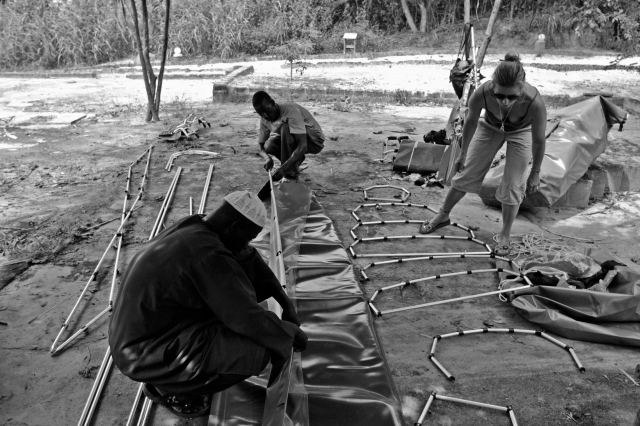 Everything in it’s place and a place for everything, Sandele, The Gambia West Africa. Image © Jason Florio

With only a little instruction from Florio and myself, the guys got the hang of building the Ally canoe straightaway.

Flo and the boys putting the Ally together – Sandele, The Gambia, West Africa. Image © Helen Jones-florio

Success! The 811 Ally canoe is ready to roll! © Helen Jones-Florio

Abdou and Ebu take the Ally canoe into the Atlantic Ocean (please don’t try this at home!) whilst Flo films. Image © Helen Jones-Florio

Despite the fact that our Gambian team mates were slightly bemused with the finished product (very different from their usual, heavy, wooden dug out canoe – ‘pirogue’), they took to the water as if the 811 Ally had been made for them. Florio went in after this with Ebu, whilst I filmed (coming soon!) – they made the ‘Hawaii 5 0’ boys look tame!! Not that we are advocating using the Ally canoes in the ocean but the guys did insist!

We’re looking forward to getting onto the River Gambia soon, with both of the Allys – ‘The Twins’ as we’re calling them for now. Although, Abdou insists that we have a naming ceremony for them and he thinks ‘Awa’ (after his wife) for one and ‘Helen (after guess who!) for the second canoe would be ‘very fine‘. Hmmm…we think a Mandinka name might be more fitting. We’ll see.

We hope to leave for Guinea on the 1st November – if not before. We’ll keep you updated.

Thanks as always for stopping by.