Tobaski Muslim celebrations in The Gambia – a day of sacrificial feasting, West Africa

Last time we were here, in The Gambia, in 2009, we spent the lead up to Tobaski in a tiny village, called Tuba Dabbo, whilst we were on ‘A Short Walk in the Gambian Bush’. We were guests of the rather wonderful Mr Bah and his wife, Penda and made to feel extremely welcome.

‘The public holiday is also known as Tabaski or Eid Al Adha when families throughout the Gambia ritually slaughter mostly sheep in ritual sacrifice. The occasion of Tabaski is in commemoration of Abrahams willingness to sacrifice his own son, Ismail, in the name of Allah. It coincides with the end of the annual Hajj (pilgrimage) to Mecca.‘ Access Gambia 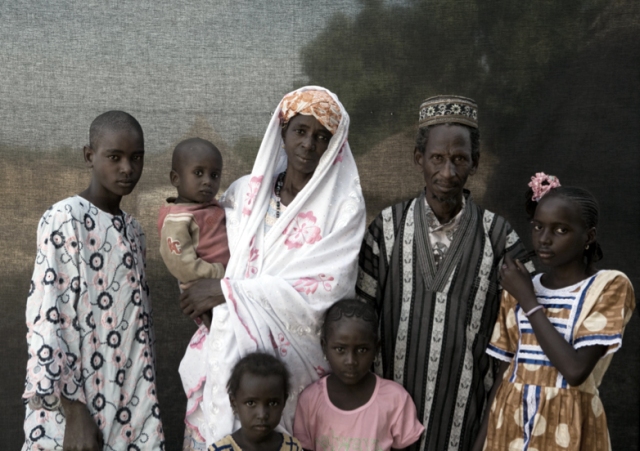 And this year, Friday 26th October, we were equally welcomed as guests of Abby and her family, here in the village of Kartong. 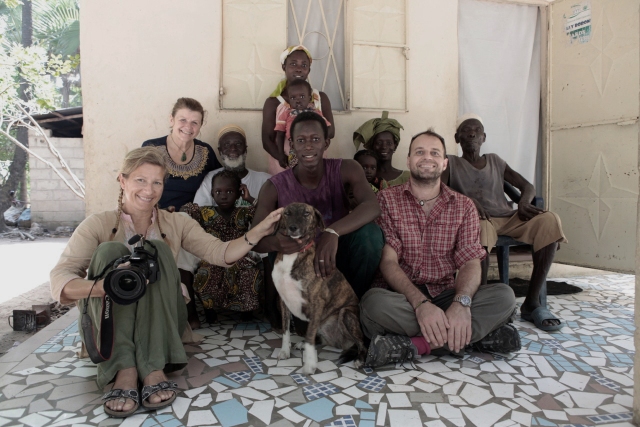 L-R: Helen, Geri (sitting behind), Mr Badji (with Fatou on his lap), Abby’s sister (with Binta on her lap), Alpha Sanney (with ‘Shadow’ the dog), Abby,  Tony (check shirt-volunteer at Sandele Eco Retreat), and ‘Pa’

The prayer ground was situated on the outer edges of the village of Kartong – not in the mosque, where prayers are usually held – due of the volume of villagers who participate in the ritual prayers. An estimated 500 people attended this years Tobaski prayers, held by the village Imam. Traditionally, in Kartong, the Imam, elders and other men from the village parade through the main street, in all their colourful finery, towards the prayer ground. 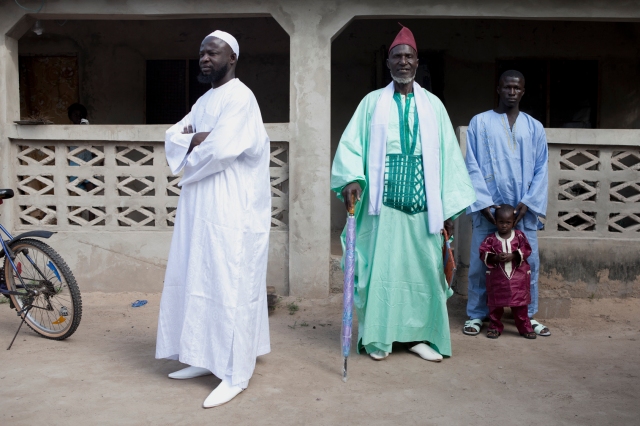 Islam dictates that all females have to cover their head with a scarf, during prayers, and they also have to sit at the back of the prayer ground, behind the men.

Everyone comes out in their finest new clothes…the girls, in particular, all trying to out-do each other. This years colour was most definitely a vibrant cerise. 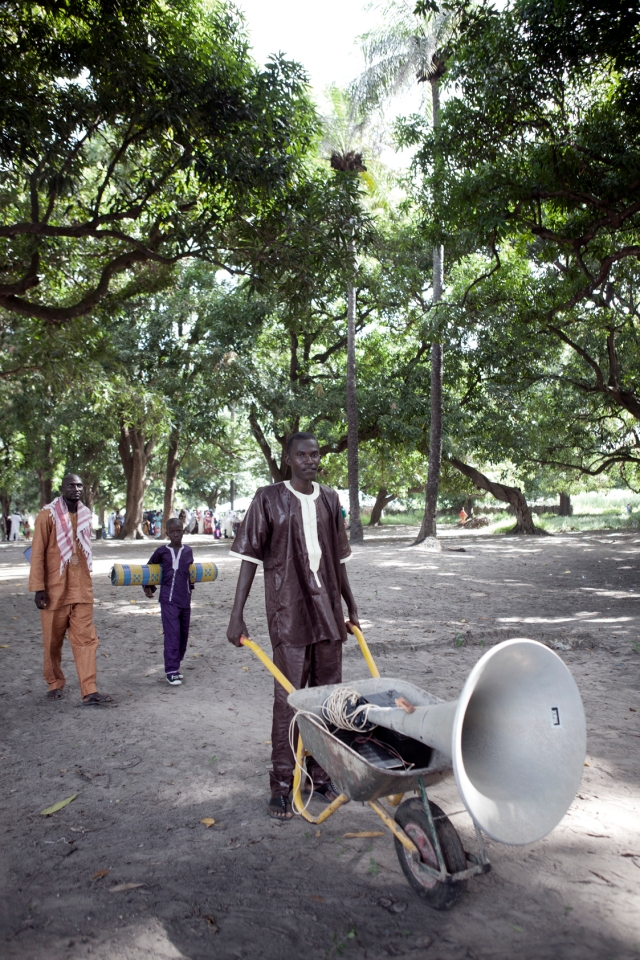 After Tobaski prayers, the loud speaker used by the Iman is wheeled away from the prayer ground, to be stored for the next village gathering. Kartong, The Gambia, West Africa. Image © Jason Florio 2012

Aside from the ritual prayers, Tobaski is all about eating – and plenty of it. Therefore a huge volume of rams and goats are ritually sacrificed, after the mass prayers – in the halal way: throats cut with a sharp knife and the blood left to drain from the incision, until the twitching body stills. 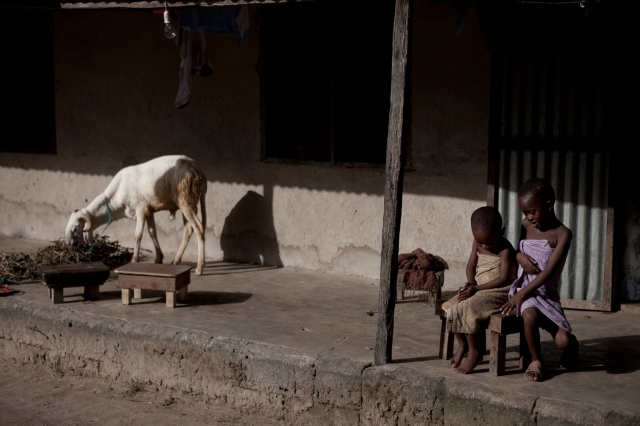 “Lunch and dinner…” Sarjo, our friend tells us. He is, of course, referring to the ram. Make the most of that last meal! Kartong Village, The Gambia, West Africa. Image © Jason Florio

And so, the ritual slaughter of ram (#1 – there were 3 in this particular compound) – Sarjo, his father and brothers get to work, Kartong, The Gambia, West Africa. Image © Jason Florio 2012

I filmed the above scene until I could watch no more – because I was crying by that point – and Florio had to take over. Even though I understand the nuances of the Tobaski tradition of ritual sacrifice, and I am a meat eater (though, not an avid consumer), watching the ram’s pathetic bleating and struggling – and knowing that no one was going to come along and save it at the 11th hour – was just a little too much for my Westernised sensibilities. I decide then and there that I’ll stick to my meat coming neatly packaged, from the deli counter at our local store!

The deed is done…ram #1 is almost ready for the cooking pot. Yum, yum…Kartong, The Gambia, West Africa. Image © Jason Florio, 2012

Once the ritual is completed, and the carcass is stripped of everything – not an inch of it goes to waste – portions of meat have to be shared with those in the community who are unable to afford to buy a ram or goat. This means that no one misses out on the mass feasting and celebrations which ensue. Within a very short time, after the ritual slaughter, the aroma of barbequed ram and goats (and cows, for those who can afford it and/or who club together in a compound to be able to buy one) permeates the air – and will carry on doing so for the next couple of days.

As guests of honor at Abby’s compound, we were given the freshest of  fried liver and kidneys (served with onions and warm tapalapa – local bread) from her very recently slaughtered goat – which we also witnessed – and, I have to say, it was deliciously tasty and tender. Perhaps, I need to rethink the neatly packaged deli theory…

We felt very honoured to have been included in this very traditional Muslim celebration – and accepted without question – and thankful for everyone we came across being open to having their photographs taken.

The day after Tobaski, our good friend Geri tells us that they nicknamed the day ‘the silence of the rams’…and there was not a bleat to be heard as we made our way through the village of Kartong on Saturday.

As always, thanks for stopping by.

1 Response to Tobaski Muslim celebrations in The Gambia – a day of sacrificial feasting, West Africa